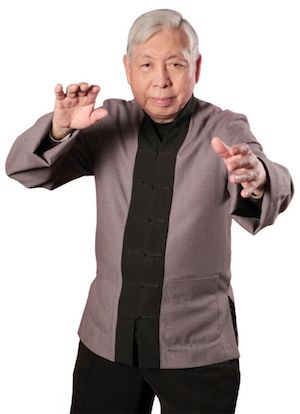 I was born in 1933 in Wenzhou, Zhejiang province, China, which is on the eastern coast.  A US Passport error has my year of birth as 1935.  I attempted to correct it fifteen years ago with the New York Social Security office but was told that it would be easier to go with 1935 since it is on my US passport.  Hence, 1935 became my official birth year.

Professor Cheng and my father were born in 1900. After World War II we all relocated to Taiwan when the Communist Government took over China.  In late 1940’s my father brought me to see his old playmate, Professor Cheng.  He was very pleased to meet his childhood friend’s son.  He asked if I would be interested in studying T’ai chi. I enthusiastically answered “Yes!” Soon I became his youngest disciple.

Beginning in the 1950’s I was assigned to assist Professor Cheng in his advance internal body training, which is to absorb a punch while he is asleep.  This intensive training was carried out three times a day early morning, noon and late in the evening.  I arrived at his house early in the morning and did not leave until late at night. This gave me a great opportunity to understand Professor Cheng’s lifestyle and martial arts skill.  Every day, I listened to his lectures and his answers to questions about T’ai Chi Ch’uan asked by students and visitors who streamed to his house.  I realized there are many advantage of staying in the Master’s house.

A few months after the internal training started, his brick fence collapsed due to the earthquake and typhoon.  He asked if I would sleep over in the rear training room to guard against intruders.  I stayed in this room for almost three years.  Professor Cheng and Mrs. Cheng were wonderful and warm.  I was treated like one of their sons.

Life living in Professor’s house was the best rehab center.  Mrs. Cheng was a very sharp and intelligent lady. She helped Professor to discipline my senior classmates.  While living there, I learned to be very careful and considerate so that there would be no need for her to reprimand me.  I made sure that my room was cleaned and neat, similar to that of a soldier living in boot camp.

Professor had five children, three girls and two boys.  At the time, the girls were about ten, eight and six years old, while the last boys were three and one year old.  First part of my training was to learn to listen to Professor and Mrs. Cheng’s guidelines.  Then I had to learn how to get along and deal with their five children.