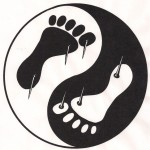 Rooting is everything. It is both a base and a foundation. It is one of the most important things in life. A good building must have a strong and firm base. A successful company needs a good foundation. A healthy plant requires a healthy root. The excellent flow of Tai Chi Chuan movements must have a steady, firm root. Without a strong root, the whole body will not be able to relax.

Relaxation is the ultimate goal for all Tai Chi Chuan players. Soft, slow, gentle flowing movements require a strong and firm base in the foot. Once the foot is firm, the other parts of the body can move freely and stay relaxed. The foot’s root itself should not be too relaxed or loose.

When the entire foot is rooted, the three points on the medial or inner aspect of the sole are of particular importance. The first point is the big toe; the other two points are on the inner part of the heel and the inner part of the ball of the foot. These points are on opposite sides of the instep. I call these points “the three active nails.” When the foot is rooted, these three points grip like three nails penetrating the ground. In the movements of Tai Chi Chuan, these three points are aligned with the weight-bearing centerline of the upper body. They are very active and play a crucial role in our everyday movements. As we walk, the root foot of the three nails propels the other foot to make a step. They assist in serving a cup of coffee or tea, or even help our fingers to turn a door key. 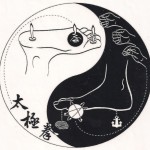 These three active nails appear to have the same consequential effect as the three electron guns in a TV. Just like the electron guns that receive satellite signals from a TV station and reflect the signals out to the TV monitor, these three nails receive the signals from the series of memory shapes of Tai Chi Chuan in the mind and transmit them through the thigh into the body.

If such that the slow movements of Tai Chi Chuan are the result of the three nails transmitting signals from the mind to the body, then the three nails should be in command of the body, not the waist. Although the waist is named in the Tai Chi Classics as being in command of the body, it was only from an external or the outer body’s viewpoint. It might have been overlooked or not realized what was behind the movement of the waist. Especially since activities in the three active nails are very little. It is hard to notice. Like a little computer chip, the three nails have almost no movement. In the movements of Tai Chi Chuan, one can see clearly that the waist turns, and body follows; one might assume that the waist was in command. Read the whole article here” The Mechanics of Three Nails 99“